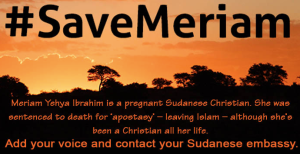 I will sing louder. When I lend my voice, lifting praise of God and Christ, I will sing louder than ever before. Never mind if I sound off-key. The angels will laugh. Holding the red, battered book of treasured hymnals up near my heart, standing in the pews where Christians pray, I will hurl those gospel tunes to the high heavens. Singing for the 27-year-old Sudanese woman sentenced to death for converting from Islam to Christianity. I was raised Muslim in America and converted to Christianity without retribution – because I live in America.

Christianity has soothed my psyche, in many manners saved my soul. I will sing this song loud as I can. I will sing for Meriam Ibrahim and the 20-month-old child who is currently in jail with her as she serves time awaiting execution for her conversion. I will sing for the eight-month-old fetus she is carrying, a baby that will be allowed birth before mother is hanged. This baby may grow up denouncing religion altogether, an unborn soul, a witness to Muslim mayhem and religious rot. I will sing for the baby’s salvation.

Catching up on the news today, I read articles about Meriam, a beautiful woman who also is scheduled to be lashed 100 times for “illegitimate sexual relations” because her husband is non-Muslim. Will she become the female Jesus on the cross – lashed and hung to die?

Sudan authorities are killing individuals who denounce Islam. Sudan’s penal code criminalizes the conversion of Muslims into other religions, which is punishable by death, according to an article by the Associated Press.

“Religious thinker and politician Mahmoud Mohammed Taha, a critic of (former President Jafaar Nimeiri who incorporated Shariah and its traditional punishments into law)…was sentenced to death after his conviction of apostasy. He was executed in 1985 at the age of 76,” says the AP article. “A number of Sudanese have been convicted of apostasy in recent years, but they all escaped execution by recanting their new faith.”

That’s Muslim madness run amok. It’s one thing for parents to bully/guilt-trip their children into embracing family beliefs and carrying on certain family traditions. We see it often. And we understand that in every country some religious beliefs become law. But when a country will kill its citizens over a disagreement of religious ideas, that’s just crazy.

That is about power and imposition. It’s about controlling what is precious: the human spirit. This is about forcing human beings – their mental and physical energy – to serve a particular doctrine. This. Is. Just. Wrong.

Of course Muslim madness is not contained in Sudan. We read about Muslims bombing Christian churches in Cairo and elsewhere. We read about Nigerian warlords, claiming to be Muslim, kidnapping 300 schoolgirls, believing that Western education is anti-Islamic, threatening to sell the girls into marriage. These mad Muslims over-shadow the millions of sensible Muslims living quiet, productive lives, clinging to Islam because of the personal peace they have found in Islamic practices. Meriam, like me, found her peace/power in Christian customs. But she is called to pay a deadly price.

An article in the U.K.’s Telegraph quotes Sudan Judge Abbas Mohammed Al-Khalifa telling Meriam, “We gave you three days to recant but you insist on not returning to Islam. I sentence you to be hanged.”

The judge should be fried. Meriam was born a Muslim, but after her father left her family, her mother raised her as a Christian, according to news reports. Meriam told the judge, “I am a Christian and I never committed apostasy.”

Amnesty International weighed in saying, “The fact that a woman could be sentenced to death for her religious choice and to flogging for being married to a man of an allegedly different religion is abhorrent and should never be even considered.” In a joint statement, the embassies of Britain, the United States, Canada and the Netherlands expressed “deep concern” over her case. “We call upon the government of Sudan to respect the right to freedom of religion, including one’s right to change one’s faith or beliefs,” they said.

Some will condemn this execution, which, even according to the Shariah law cannot take place until two years after the woman gives birth. Some will call for respect for religious freedom. For my part, I will sing the Christian songs my Muslim-bred heart has embraced. I will sing them loud and clear.