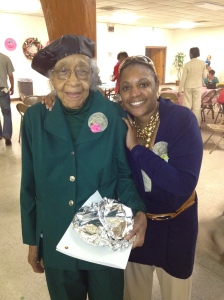 Grandma had recovered from surgery physically, well enough to get around. But she was giving Granddad fits. He needed a break, so I picked her up to attend a Women’s Day with me at a church one Saturday.

When Grandma was released from the hospital, I was there to help Granddad get her home. As she was getting out of the car, she asked for her cane, but as I was reaching to hand it to her, Granddad said she couldn’t have it.

“She don’t need no cane!” he snapped.

For years, neither of them would use their cane. I started referring to the canes as “walking sticks,” to make the idea more palatable. Grandma would sometimes carry hers along for emergencies, but Granddad would not take his. He insisted that they walk on their own two legs, keeping them strong. Caught between the two of them at the curb, I yielded to Granddad, thinking he knew Grandma – and her strength – better than I. I hooked my arm in hers to help her steady her walk, but he insisted she walk on her own. I stood back privately cheering her on. She made it from the curb to the steps slowly but surely. She made it up the steps, holding onto the rail. She seemed proud of her own strength, and I certainly was.

A few more steps and Grandma fell on her face. I had never felt rage towards my Granddad until this very moment. A man walking past rushed up the steps, helped Grandma back onto her feet, and walked her up the next bank of steps into the house. I felt like God had sent an angel because my ass had punked out. I had allowed Granddad’s fussing to prevail and it left Grandma  face down in the dirt. I rolled my eyes at Granddad, and focused on getting Grandma up the stairs into bed. I was determined to keep Granddad at bay so she could use their stair lift up to their bedroom, but she insisted on walking the stairs instead.

This was not the first time in my life I’d seen Grandma fall. Once, years ago when I lived with them I heard her fall down the stairs on her way out to church one night. I was surprised that she’d bounced up and proceeded out the door. They both valued their strength and resilience.  I respected it and wished I was their brand of strong.

Over the next several months, Grandma regained her strength physically, but I could tell she was changing in other ways. I called to check on her often, and I found her gushing with stories and secrets she wanted to share. Her stories were so interesting – and full of wisdom – I bought a device to record her over the phone. These were stories I’d been trying to get at all my life: what kept you going? Why did you stay married so long if you hated Granddad’s fussing? Why were you so critical? What was life like for you growing up?

Without my asking questions now, she told me about her past and how she was feeling in the present. She wanted to talk more than I had time to listen, but sometimes I made time to allow her to vent.

“How are you feeling this morning Grandma?” I’d ask.

“Sometimes I don’t even want to get out of bed. I wish the Lord would come and take me home,” she said one morning. “I feel like that more and more these days. But I give myself a few minutes to feel sorry, then I get on up and get on with the day.”

The first time she hinted that she feels depressed sometimes took me by surprise. But she instantly seemed more real, more human – beyond her title of Grandma, beyond her role of stalwart in my life.

Over the next several weeks, Granddad complained bitterly about her mood swings and outbursts. He said she was wearing him out, he needed a break. I promised to pick her up on Saturdays some weekends to give him a rest for a few hours. The first time, I picked her up to attend a Women’s Day at a church where I worked through the week teaching English as a Second language to men and women from around the world. The church was less than 30 minutes from where Grandparents lived, and I figured she would enjoy almost any event held in a church.

Grandma was treated like a star in the workshops once I disclosed that she was 93 years old and had been married since she was 21. The women believed she must be sitting on a pot of wisdom, and they pelted her with questions. She mostly smiled, nodded, and gave short answers. I did not think to take notes because I had planned to simply enjoy the day. Although some of the women in the workshops may have felt educated by her bits of wisdom, my lesson came when I took her home.

Helping her out of the car, I noticed she’d had a bout of incontinence. I hadn’t been prepared for what to expect after major surgery, through which most of her intestines were removed. I’d been told that the doctors’ would prescribe a pill to stop her up because modern medicine was that awesome. Either she had not taken the pill this day or it hadn’t worked. I pretended not to see the small mess she’d made on the passenger seat of my car, determined to maintain her dignity. I loved her enough to ignore the mess. I hadn’t thought that much about the ways we show love, the ways we need love, but I was beginning to learn.